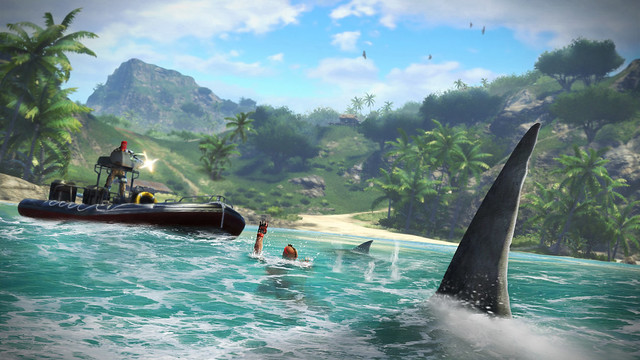 Here’s a short self-reflection about when my soul wept for the non-player character (NPC), a great cat, I had to slay and skin in Far Cry 3 to create a mobile phone pouch or whateverhell bag it was.

OK, so let’s start this off with a short personal description: I am not the most faint hearted person in the world. I grew up watching all sorts of gore movies from Cannibal Ferox to whatever sleaze from when I was quite little – and perhaps not even allowed to watch them. I have indeed killed a living being (I used to fish quite a lot while in Finland), I used to work in a place that produces all sorts of meat products, and I am not the best conservationist in this world – although I support the efforts of Australian Marine Conservation Society as I think they are on an important mission which is not publicly well supported.

Still, I have come to realise I dislike killing (some) virtual animals in (some) video games. This thought dawned on me in the early hours of Far Cry 3 where I basically needed to create all sorts of stuff from animal hides. From virtual animals that I needed to hunt and kill.

So, what’s the big deal here?, one could ask – and I am asking! Throughout my life as a gamer from NES to Xbox360 I have slain all sorts of virtual beetles, ice wolfs, sheep, dragons, angry fish, and animals whose name is just too strange or mythical to recall. Still, the fact of life is that I had to return Far Cry 3 back to the store as I didn’t find it engaging especially because of this aspect.

Now, my question is: why does the being Marko care? Why does this move him even an inch? They are just virtual animals! In contrast, I enjoy first person shooters (FPS) almost every day. You bloody kill people in these games all the time (well, lately mostly aliens for me)!

An Interlude:
And a word of reason to all you video game haters and non-players out there: no, it’s not about quenching some sort of thirst for death and killing. It’s about the challenge, the action, the play, the narrative and many, many other things. Mechanics that FPSs often have, are just a moderately easy way to create challenging interaction and antagonism. And no, majority of research at least I have read shows violent games do not result in more violent people in real life by default. Well, this isn’t the topic of this post anyway, So, onwards.

Also in contrast, I’ve recently been playing Skyrim and the newest Borderlands. In both of them, especially Skyrim, you end the lives of all sorts of life forms, for example angry ice wolfs and dragons. I never got this feeling of disgust of slaying virtual animals in Skyrim.

So the questions is: are Far Cry’s animals too real? Is the so called fidelity, lifelikeness, too high (for me)? Is this the reason? Or the fact that the game requests and depends on a systematic use of animals as an integral part of the game: instead of bypassing it somehow you need to slay as part of a mission, take the hides and prepare stuff like a bag or whatever – well, you need to pick berries, herbs and all whatever other stuff too.

Anyway, something in this process clearly reduced my game play engagement and enjoyment. Based on what I know, I will not be playing Far Cry 4 either, as it has similar kind of mechanics. At the same time I acknowledge many people playing these games don’t sacrifice a single thought on such matters. It is just a game, and killing an innocent virtual animal that does actually exist does not do anything. So does this mean they actually exist too much to me then or what? Hell, I guess asking such questions is the reason I am still stuck at the academia and pondering such matters…