Master Chief and Arbiter on a wedding cake

Recently I bought the #67 GameInformer as it had a huge cover issue on Halo 5. I and my wife have been waiting for that game (and to buy the special edition Xbox console) since… well, basically since Halo 4.

After reading the article for a while, a sentence caught my eye: “split-screen option is not supported”. What, really? Did I read it right? Then I saw the post on IGN, which basically had 343 Industries explaining why more processing power of Xbox One means less fun (or that’s how I and 3000 commenters seemed to read it).

I am truly shocked and amazed. Isn’t the whole point of creating more powerful technology to better support our social nature of play? There’s nothing to say that “increased visual and gameplay fidelity”, elusive concepts in the first place, are the most important things in gaming. If it was, Halo Combat Evolved would’ve never been as successful as it was (nor currently Minecraft, for that matter). Many of the PC FPS games were much better looking than the first Halo, but still it made a huge impact. It was the interaction and the sense of being part of a universe that mattered, and how the social aspect of gaming was perfectly mediated by a technology that was basically less powerful than PCs of that time. If Bungie was able to do split-screen with the first Xbox, how is it possible 343 isn’t able to achieve it with Xbox One with that much more horsepower?

I used to spend hours with my friend, playing the first Halo through from the lowest difficulty to the Legendary. I and my wife have played different Halos almost annually, because of the split-screen option: it has been part of our relationship since we started going out with each other. We even ended up having Arbiter and Master Chief on our wedding cake (if you can forgive what big nerds we are). And now this, a day after I spotted the ad of the new and long-awaited Halo 5 Xbox One special edition console. And now, we are not buying it all. This might be the death of my wife’s Xbox gamertag, which has ‘Arbiter’ in it. For us, it might be the end of being in the (future versions of) Halo universe.

This decision by the developer to leave the split-screen option out will change our whole perspective to gaming. It will also make redundant the fact that we need to buy an Xbox anymore. Perhaps this sort of closes the circle for me. I used to have the first Playstation and I wasn’t too keen about Xbox when it came out. Then, I went to visit some of my friends who insisted that I was wrong, that now, there was a new king in the console (and other) FPS gaming. That day changed my mind, and I went to buy an Xbox and Halo the next week. Since then, I have always had a new Halo, and a new Xbox. All because of the split-screen, and the game level called The Silent Cartographer.

I don’t usually write such sad gamer nerd posts, but such news reveal how intricate and fragile ecosystem gaming can be, and how it is part of your personal history. It almost feels like an end of the era. This is worse than hearing that “this was the final Halo”. 343, you guys just truly blew one of your “customer segments”. No split-screen has led to “split” of many other things. 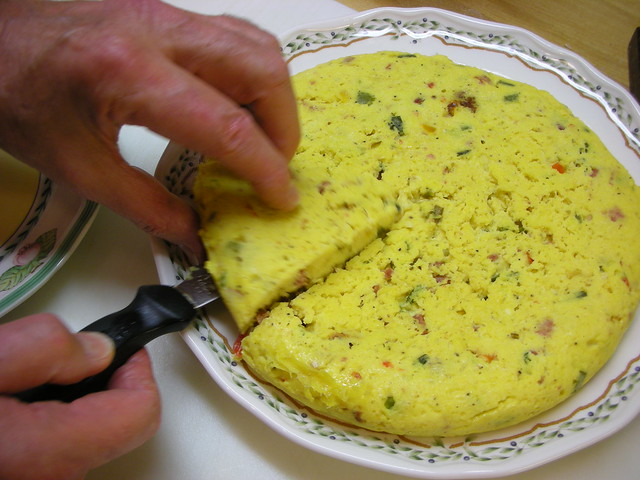 Jim Makes a Frittata in His New Frittata Pan

Some initial thoughts on human-computer interaction after several weeks of intense literature review on ‘virtual embodiment’.

I was eating a frittata the other day – if you don’t know what a frittata is, that’s OK, doesn’t matter to get the idea (but it’s that thing up there in the picture).

Anyway, while I was taking the last piece from the oven casserole (which is made out of material that feels like porcelain or something), I used a knife to gently scratch some crispy cheese from the corners of the pan. A sudden, annoyingly simple idea came to me: with the stainless steel dinner knife, I was able to feel the material of the casserole, and judge from that if I would scratch and ruin it or not.

While thinking of this, I also tried the pan surface with my fingers. The feeling I got from that pan was basically the same as with the dinner knife.

Now, this might feel rather arbitrary and useless pondering of everyday life, but from such little realisations often come the most interesting things. We are so used to such experiences without thinking how they occur to us that we don’t always think how they might take place in other contexts, such as in using virtual environments.

If I am able to get the feeling of a material or a quality through another object, such as the feeling of a frittata pan through a dinner knife (similarly perhaps how a tennis player experiences a ball through a tennis racquet or a crane operator feels a crate through the crane), what various things do I get a feeling of through interactive media input-output technology? It seems that authors and others like to jump on board with McLuhan’s (1964) term ‘an extension’, but do we extend our thinking beyond that term (which itself is a tool of language to communicate about these matters)? What actually does extend?

So, what different matters or qualities might get extended through control devices such as game controllers? As a gamer, I can reflect that for example in Halo games, different weapons and vehicles feel different, and I prefer some over others – I loved the double needler when it was available. Nothing could give more satisfaction than blowing someone away with them with a huge explosion.

At the same time, interactive media extends our sense of social presence. Now, this is a different matter altogether. Technology gives us the possibility to see another person in the form of a virtual embodiment, an avatar. How the avatar looks like, what it does and how it communicates transmits us through a screen that there is actually someone there. It extends social interaction, and the social interaction is as real as it is in “the real”. The growing normality of this experience is blurring the fact how unique that is in the evolution of human-technology interaction.

As a sub note, I am developing a rather big issue with terms such as virtual and real. I feel Rob Shields (2002) has done a nice job in trying to get us out from this definition muddle. If we continue to talk about ‘virtual’ as something less real than the concrete world around us (which also psychologically and philosophically is very much debatable) we are basically saying virtual experiences are not real. This would mean that our experiences in various virtual worlds, such as the long grinding sessions in WoW or Borderlands never happened. I am sure no reasonable person would give such a comment. So why do we continue saying experiences such as social interaction in virtual contexts are somehow less than face to face? Based on some of the studies I have examined, for some users some forms of experience can be even be more.

Thinking such things tend to gather sort of blank stares and comments like “well, that is very philosophical, but…”. I disagree with the “it is so philosophical” (whatever it might mean for some people to say this). I think it is rather pragmatic to use your head to try to see what these experiences really truly mean instead of jumping on the technology hype or the luddite movement. It lifts the veil over the novelty of emerging technologies and sort of re-focuses thinking to how we actually interact with objects and other people. 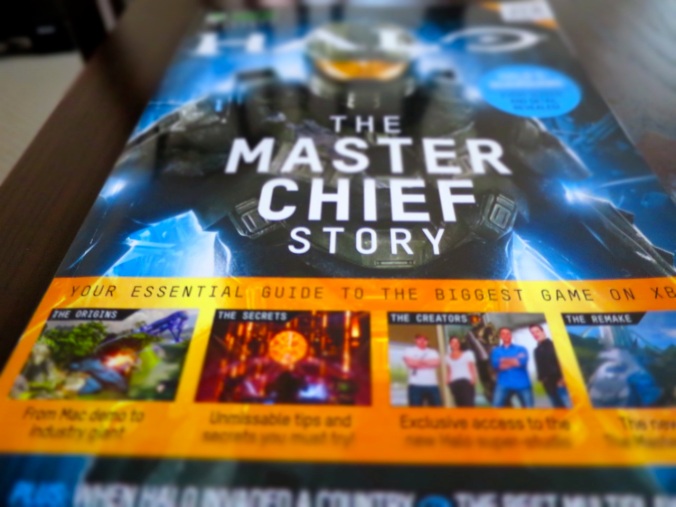 OK, so here’s a short battle report amongst the fights for Reach in Halo Reach (who would’ve guessed!), which I and my wife casually started playing again after quite some time.

An urge came to write about narratives and the general understanding of a (game) universe. I have played through all the Halos (except the Wars) several times. I love the world, the general concept and the story. Still reading this official Xbox magazine Master Chief special issue that came home with me from EB Games, I finally have to admit it: I never had any clue when most of the things happen in the Halo world, and what the hell for am I running around all sorts of galaxies blowing up aliens and activating all sorts of massive relays and bombs and whatnots by “pressing X”.

After skimming through the magazine, which in my eyes does a pretty decent job in presenting the Halo universe and putting everything on a timeline, I got an “aha!” moment. Now I understand many things about the subtleties of the narrative, and get the general picture what actually takes place throughout the Halo timeline. Yeah I know, it’s an important revelation, but so what?

At least for me, this never kind of dawned on me during the game play. I’m always so deeply occupied with doing the missions, staying alive, getting those supercool head shots and trying not to flip the darn M12 Light Reconnaissance Vehicle aka Warthog all the time – my wife hates when this happens as she’s the person operating the cannon. Notable is that she does not always enjoy my driving neither in the virtual or the real world.

After reading some of the stuff in the magazine, I also realized how things took place in relation to other events (for example events in Halo: Combat Evolved in relation to Reach). Still, during playing or while ‘in the game’, these things were quite far from my radar. So, at the same time one could question the importance of story, but without story, the whole Halo universe most likely would not feel as Immersive (I try to get away from that word, but let it slip this time) and captivating. It would not be coherent nor interesting.

So from this very deep autoethnographical account we can derive some definite conclusions: video games are excellent medium for learning! Yay! Stop all ed journals from posting anything about this matter anymore. 🙂 It would be interesting to experiment on a wider scale in the future how such video game + reading material such books or in-game text support learning history also in formal learning settings (or if there’s something that ruins this), and what sort of a role personal characteristics might play.

I don’t often enjoy the discussions about the educational value of games, especially when it often goes to the “either or” stance of if games are better than reading (“because nobody reads anymore!!!”). And then there’s the people saying “books will be replaced by blaa blaa [your favorite future prediction here]”. Book is a technological concept that gathers text that communicates something. A book is not important in itself, but what it as a construct affords. Papyrus left the building already a while ago, and we don’t write on boards of clay boards anymore – although I sometimes feel blackboard gets quite close to this antiquity. Still I do not think text and writing somehow vanishes from the picture. Format of books might change, but communication stays – or I might be totally wrong, and in the future we communicate only through Minecraft-style sounds and odd avatar gestures that have become the new norm.