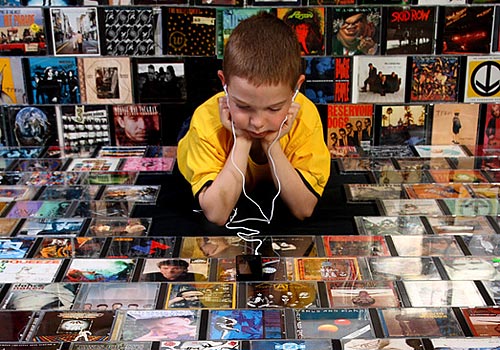 The awful thing in this is that after just two days of using it, I just love the service.

I listen to music a lot. I think I’m one of those people you would say can’t live without music. It means to me more than just a background noise; I love the melodies, the rhythm, every different instrument separately and together [I’m one of those hearing even the good bass lines in the back], the lyrics, the gigs the album artwork: everything.

It’s not long ago, maybe a day or two, when I moaned about how I’m still just going to buy my music in CD and ignore these rather new web services around. And the came the Spotify invite.

Today I went to this music store, and somehow automatically came the thought about me having this service and there’s still lot of secrets to be found from its endless horizon of different, unexplored music. ‘Cause I’m always finding new bands and artist.

So there you have it, I’m hooked. But still, I will be buying the ‘real things’ as CD. Recently I justified this with a fact that I like the album art and printed lyrics, and also me as being a art director and a designer can give value for the good production. Like in the case was with the Mastodon album.

But in the other hand, being in love to the CD cover is like eating meat that you know is unethically produced: you may like it, but you know there’s some kind of exploitation behind it.

Think of the benefits of music being just the electric waves. No discs, no covers, no useless cellophane wrap; nothing in the physical world that someone has to manufacture, pack and transport to hundreds of different places. Nothing to left as trace when the ‘consumer’ stops to ‘consume’ and wants to throw the whole thing away. There comes a lot of pollution and waste in the before mentioned process. Well maybe I’m doing over thinking here, but can you say it’s not true?

But, what happens to artists and their pay? That troubles me the most.

People should understand, that if there’s a service where you can get almost all music in the world with only 10 $ per month, someone undoubtedly looses revenue and it won’t be the record label who gets the hardest hits. It will most surely be the artist. And if there’s someone saying “Them artists do music because they love it, they don’t need that much money”, I’ve got just one thing to say to you: Piss off with your ignorance.

One thing that Spotify can’t do [yet] is make the music come with me everywhere I go. I believe Nokia is trying this with its ‘Comes with music’, but I don’t know how that is currently going. Most likely not as good as it supposed to ’cause no ones writing about it all the time.

Well, for the final thought about this all. I watched today in a class where I went, how my teacher fought with her cassette player trying to rewind the right spot for us from the tape. After this we watched a video [yeah, a VHS]. Some rewinding took place again. Right there, all of a sudden, I felt how many things had changed and how I felt how prehistorical tools she was using. So I was thinking that is me trying to stick with the CD [and justifying it with some thin excuses] a same kind of almost embarrassing act?

Oh just one more thing: whole the time I was writing this post, I was listening The Black League‘s new album that came out this spring. From Spotify.

5 thoughts on “Spotify; don’t know what to make of it.”